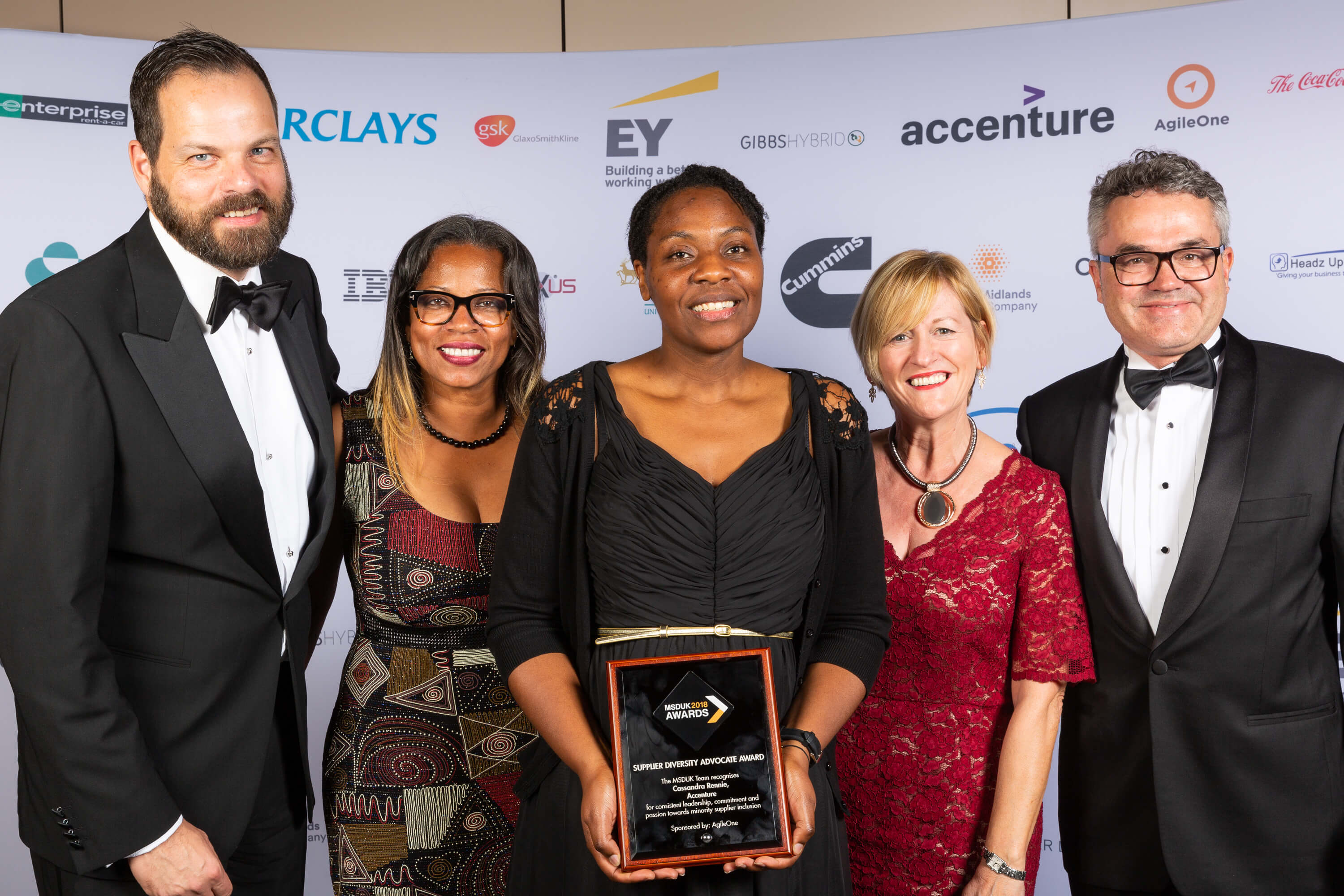 The winners of the UK’s most prestigious supplier diversity awards were revealed last week (Wednesday 26th September) at a glittering ceremony at Birmingham’s Vox Conference Centre.

The annual MSDUK Conference and Awards is a must-attend event for Ethnic Minority Businesses looking to drive inclusive procurement and connect with diverse like-minded businessmen and women. This year’s event saw over 1,000 entrepreneurs, exhibitors and supplier diversity leaders gather to honour the efforts of both large corporations and ethnic minority owned businesses in making supply chains both inclusive and competitive.

The MSDUK Awards 2018 were split into six categories:

Blue-collar recruitment agency Fortel Services and Clinical Research Organisation (CRO) Clintec International were named joint winners of the Scale Up Business Award, an award which recognises businesses that have shown significant demonstrable growth over the last two financial years within their specific marketplace.

The Inclusive Procurement Award, awarded to a British public or private sector purchasing organisation outside of the MSDUK network that demonstrates the strongest commitment to supply chain diversity, was handed to HS2 – the UK’s imminent high-speed railway and the largest infrastructure project in Europe.

Paul Harvey, Head of Procurement at Marsh & McLennan Companies, and Cassandra Rennie, UKI Operations and Sustainability Senior Analyst at Accenture, were named joint winners of the Supplier Diversity Advocate Award for their commitment, passion and hard work to promote diversity and inclusion within their organisation’s supply chain; while national energy supplier EDF Energy picked up the Supplier Diversity Excellence Award in recognition of its exceptional leadership in supplier diversity.

Raj Tulsiani, CEO of Interim Management and Executive Search firm Green Park was crowned Entrepreneur of the Year in celebration of his longstanding commitment to supplier diversity and for “setting a new benchmark for the recruitment industry that widens the gate without lowering the bar”.

Concluding the dazzling awards ceremony, Farida Gibbs, CEO of Gibbs Hybrid, which provides single-source integrated Talent Management Services, Programme Consultancy and Outsourcing Solutions to mid-market and FORTUNE 500 companies, received the prestigious accolade of Businesswoman of the Year in recognition of her “dynamic, creative and visionary” leadership.

Mayank Shah, CEO of MSDUK, said: “This year’s awards were driven by the idea that innovation through diversity will be what powers the UK economy over the next decade. All of our award finalists are living proof of this principle, and long may their commitment to supply chain diversity continue.

“Our warmest congratulations go to the winners of the MSDUK Awards 2018. They deserve these awards for the outstanding and important work they do”.

Farida Gibbs, MSDUK Businesswoman of the Year and CEO of Gibbs Hybrid, said: “I am thrilled to be named MSDUK Businesswoman of the Year. I’ve never considered myself to be an ‘entrepreneur’ – I am someone who loves what they do with great passion. I didn’t do well at school, an illness at the age of 15 saw me in and out of hospitals and I left school with 2 GCSE’s. I felt like a failure. I truly believe this is one of the reasons why I push the boundaries, am tenacious, never give up, take a leap of faith (self-belief) to prove that I am successful and can be successful if I put my mind to it”.

She added: “My upbringing has taught me to be a great leader for my team, to lead by example, build a team who share the same common purpose and outlook on life. Whatever I set my mind to do, I do. Whatever we dream, our vision is all within our reach”.

The 2018 MSDUK Award Winners in full:

SPONSORED BY THE COCA-COLA COMPANY

Businesswoman of the Year

Entrepreneur of the Year

Click here to assign a widget to this area.